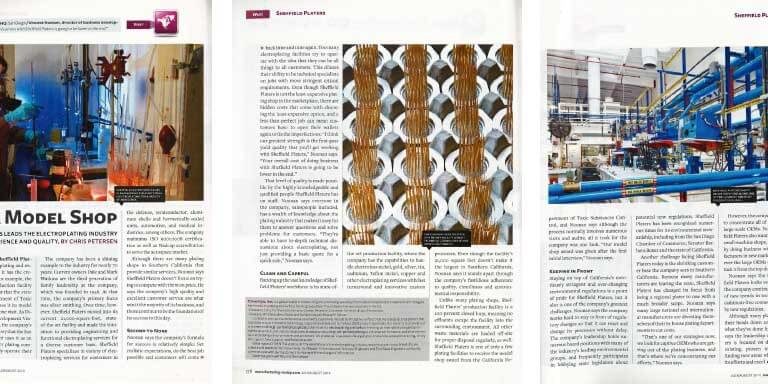 Sheffield Platers Leads the Electroplating Industry with Experience and Quality 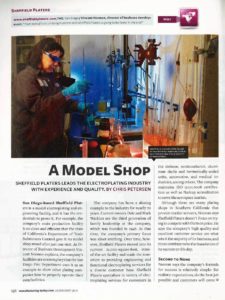 San Diego-based Sheffield Platers is a model electroplating and engineering facility, and it has the credentials to prove it. For example, the company’s main production facility is so clean and efficient that the state of California’s Department of Toxic Substances Control gave it its model shop award after just one visit. As Director of Business Development Vincent Noonan explains, the company’s facilities are so exemplary that the San Diego Fire Department uses it as an example to show other plating companies how to properly operate their own facilities.

The company has been a shining example to the industry for nearly 70 years. Current owners Dale and Mark Watkins are the third generation of family leadership at the company, which was founded in 1946. At that time, the company’s primary focus was silver smithing. Over time, however, Sheffield Platers moved into its current 21,000-square-foot, state-of-the-art facility and made the transition to providing engineering and functional electroplating services for a diverse customer base. Sheffield Platers specializes in variety of electroplating services for customers in the defense, semiconductor, aluminum shells and hermetically-sealed units, automotive, and medical industries, among others. The company maintains ISO 9001:2008 certification as well as Nadcap accreditation to serve the aerospace market.

Although there are many plating shops in Southern California that provide similar services, Noonan says Sheffield Platers doesn’t focus on trying to compete with them on price. He says the company’s high quality and excellent customer service are what win it the majority of its business, and those continue to be the foundation of its success to this day.

Noonan says the company’s formula for success is relatively simple: Set realistic expectations, do the best job possible and customers will come back time and time again. Too many electroplating facilities try to operate with the idea that they can be all things to all customers. This dilutes their ability to be technical specialists on jobs with more stringent critical requirements. Even though Sheffield Platers is not the least-expensive plating shop in the marketplace, there are hidden costs that come with choosing the least-expensive option, and a less-than-perfect job can mean customers have to open their wallets again to fix the imperfections. “I think our greatest strength is the first-pass yield quality that you’ll get working with Sheffield Platers,” Noonan says. “Your overall cost of doing business with Sheffield Platers is going to be lower in the end.”

That level of quality is made possible by the highly knowledgeable and qualified people Sheffield Platers has on staff. Noonan says everyone in the company, salespeople included, has a wealth of knowledge about the plating industry that makes it easy for them to answer questions and solve problems for customers. “They’re able to have in-depth technical discussions about electroplating, not just providing a basic quote for a quick sale,” Noonan says.

Backing up the vast knowledge of Sheffield Platers’ workforce is its state-of-the-art production facility, where the company has the capabilities to handle electroless nickel, gold, silver, tin, cadmium, Teflon nickel, copper and other electroplating services with fast turnaround and innovative custom processes. Even though the facility’s 21,000 square feet doesn’t make it the largest in Southern California, Noonan says it stands apart through the company’s fastidious adherence to quality, cleanliness and environmental responsibility.

Unlike many plating shops, Sheffield Platers’ production facility is a 100-percent closed loop, meaning no effluents escape the facility into the surrounding environment. All other waste materials are hauled off-site for proper disposal regularly, as well. Sheffield Platers is one of only a few plating facilities to receive the model shop award from the California Department of Toxic Substances Control, and Noonan says although the process normally involves numerous visits and audits, all it took for the company was one look. “Our model shop award was given after the first initial interview,” Noonan says.

Staying on top of California’s notoriously stringent and ever-changing environmental regulations is a point of pride for Sheffield Platers, but it also is one of the company’s greatest challenges. Noonan says the company works hard to stay in front of regulatory changes so that it can react and change its processes without delay. The company’s leadership holds numerous board positions with many of the industry’s leading environmental groups, and frequently participates in lobbying state legislators about potential new regulations. Sheffield Platers has been recognized numerous times for its environmental stewardship, including from the San Diego Chamber of Commerce, Senator Barbara Boxer and the state of California.

Another challenge facing Sheffield Platers today is the shrinking customer base the company sees in Southern California. Because many manufacturers are leaving the state, Sheffield Platers has changed its focus from being a regional plater to one with a much broader scope. Noonan says many large national and international manufacturers are divesting themselves of their in-house plating departments to cut costs.

“That’s one of our strategies now, we look for captive OEMs who are getting out of the plating business, and that’s where we’re concentrating our efforts,” Noonan says.

However, the company doesn’t want to concentrate all of its attention on large-scale OEMs. Noonan says Sheffield Platers also wants to attract more small machine shops, and it is doing so by doing business with larger manufacturers in new markets first. “Wherever the large OEMs are, we try to attack it from the top down,” he says.

Noonan says the future for Sheffield Platers looks very promising, as the company continues to stay ahead of new trends in technology such as cadmium-free connectors as required by new regulations.

Although many plating shops keep their heads down and focus only on what they’ve done for years, Noonan says the leadership of Sheffield Platers is focused on diversification of existing, proven technologies and finding new areas where it can focus its efforts and excel.

As we closely monitor the evolving COVID-19 situation, we wanted to update you with Sheffield Platers’ response.